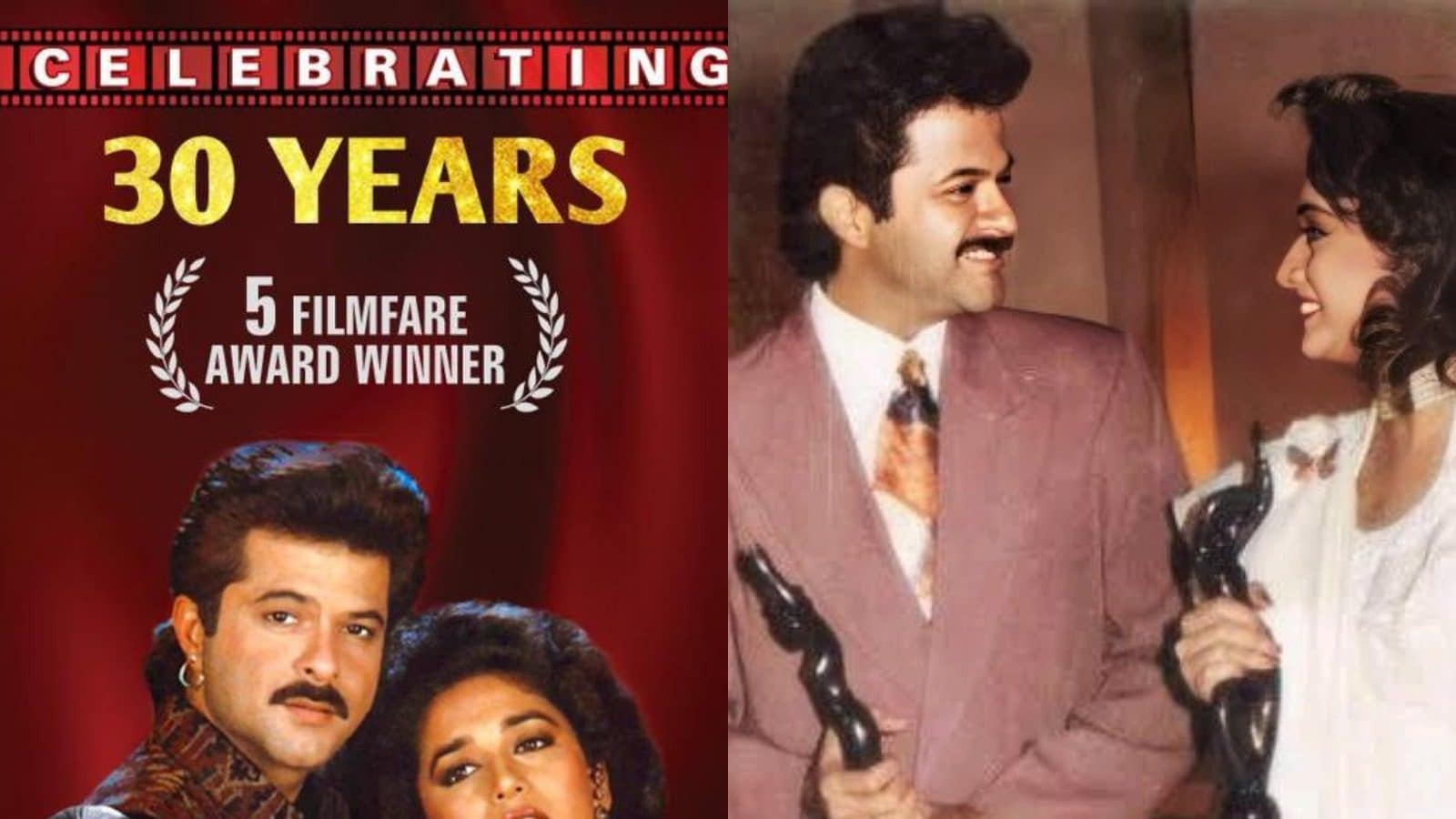 Bollywood actor Anil Kapoor is one of the much-loved celebrities in the Indian film industry. His 90s films make his fans go nostalgic, and reminisce about the memories of the good old times. On Sunday, Anil took to Instagram and celebrated 30 years of his Madhuri Dixit co-starrer titled Beta, and recalled the memories associated with his 1992 film.

Taking to Twitter, the Dil Dhadakne Do actor took a stroll down memory lane and dug out a couple of priceless throwback pictures featuring himself and Madhuri. The pictures see the two receiving Filmfare Award for their performance in the film.

In the first picture, we see Anil and Madhuri as they look at they smilingly looking at each other while they hold their respective trophies in hand. The second picture is a poster of the film that sees Anil, Madhuri and Aruna Irani. The poster reads, “Celebrating 30 years of Beta,” “5 Filmfare Award Winner.”

As we scroll further we see the Slumdog Millionaire actor receiving the award on the stage. The next picture features Madhuri Dixit along with late legendary painter M.F Husain and tv actress and show host Simi Garewal, as she delivers her winning speech on the stage while she held her trophy in hand.

Sharing how it felt when the movie Beta turned out to be the biggest blockbuster of the year 1992, Anil Kapoor wrote in the captions, “It was a great feeling for us as actors when our film was the biggest blockbuster of the year 1992 and received so much love and all the accolades! Celebrating 30 years of Beta! @MadhuriDixit#IndraKumar #AshokThakeria.”

Madhuri too reposted the tweet by Anil Kapoor, and wrote, “Absolutely agree with you @AnilKapoor.”

As soon as the stars shared the post on social media, fans started heaping praises on their favourite on-screen couple and demanded a collaboration between the two.

While one fan wrote, “The chemistry between Anil-Madhuri right from the late ’80s to mid-’90s was par excellence. Though movies of that era like Tejaab, Ram-Lakhan, Kishan-Kanhaiya, Beta were directed by different directors, but they will be remembered only for the unmatchable pair, Bollywood has ever produced!” another comment reads, “Congratulations, for Superhit BETA, What a Performance sir, even after 30 years we Rember & never forget BETA.”

One fan wrote, “We need to see you two coming back and creating magic together again please!! #30YearsOfBeta.”

Directed by Indra Kumar and written by Naushir Khatau and Kamlesh Pandey, Beta is a family drama featuring Madhuri Dixit, Anil Kapoor and Aruna Irani in pivotal roles. The movie is an official remake of the 1987 Tamil movie Enga Chinna Rasa. The story of the film was inspired by the Kannada novel Ardhaangi, by B. Kuttaswamayy.