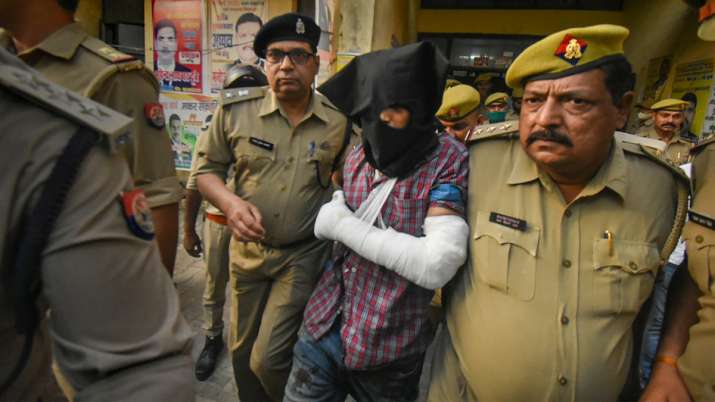 Murtaza Abbasi, an IIT graduate who attacked two policemen with a sharp-edged weapon at a gate of the famed Gorakhnath Temple in Gorakhpur, was on the radar of the Anti-Terrorism Squad (ATS) for a long. Sources told India TV that an ATS team had visited Murtaza’s residence by forging their identity as advocates. However, he managed to flee to Nepal.

Murtaza had injured two constables at the temple before he was overpowered. He is currently under judicial remand for two weeks.

According to police, he had tried to forcibly enter the temple, which was teeming with devotees during the Navratri festival, after raising the religious slogan of ‘Allahu Akbar’.

Sources said that suspicious items, including jihadi videos linked to ISIS and Syria were found on his laptop and pen drive. Several videos of guerrilla attacks were also found on his mobile phone. He was inspired by radical Islamic preacher Zakir Naik who fled India in 2016. Naik is accused of being involved in terror financing, giving hate speeches, money laundering and inciting communal disharmony.

ATS sleuths are now questioning Murtaza and his associates as well. It was discovered that he had gone to Mumbai, Coimbatore, and Nepal in the last few days.

Sources said that Murtaza was of the view that if is killed by security forces during such attacks, he would be ‘hailed’ as a ‘martyred’. This was perhaps the reason why he opted for the Gorakhnath Temple. Had he gained entry inside the temple premises, he would have caused serious injuries to the devotees.

Uttar Pradesh officials have termed the attack on two constables at a gate of the famed Gorakhnath temple as a “terror incident”.

Notably, Uttar Pradesh Chief Minister Yogi Adityanath is the head priest (Mahant) of Gorakhnath Temple and has his personal accommodation here. CM Yogi was not at the temple at the time of the attack.