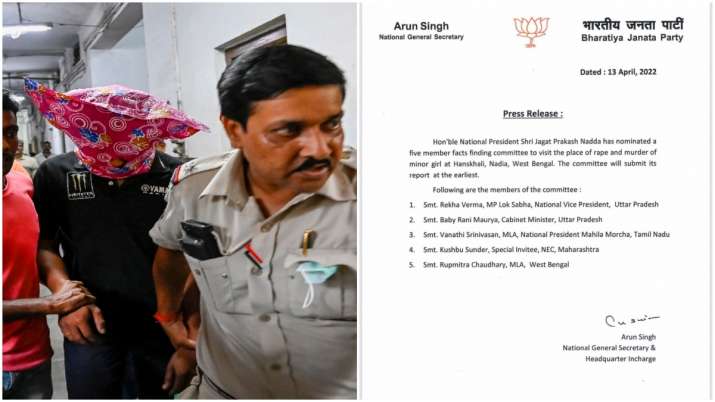 The Bharatiya Janata Party (BJP) National President on Wednesday nominated a five-member fact-finding committee to visit the place of “rape and murder” of minor girl at Hanskhali, in Nadia district of West Bengal. The committee, with all the five members being women, has been asked to submit its report at the earliest.

Calcutta High Court on Tuesday ordered the handing over of the probe in the alleged rape and death of a minor girl at Hanskhali in West Bengal to CBI from the state police for ensuring a “fair investigation”. Passing the order, a division bench of the HC presided by Chief Justice Prakash Srivastava said the fact that there is no post mortem report and no death certificate creates suspicion about an attempt to suppress the entire incident and to wipe out evidence. “In the circumstances of the case and after considering the legal position, we are of the opinion that in order to have fair investigation in the matter and to instill confidence of the family members of the victim and also the residents of the locality and the State, the investigation should be carried out by CBI instead of the local police,’ the HC bench ordered.

“We direct the State Investigating Agency to hand over the investigation to CBI with immediate effect…We find that the investigation suffers from serious lapses on several important aspects,” the bench, also comprising Justice R Bharadwaj, directed. The court directed the state investigating agency to hand over all papers relating to the probe along with the custody of the accused persons to CBI forthwith. It also directed CBI to furnish a report about the progress of investigation before the court on the next date of hearing on May 2. “The concerned authorities are also directed to extend full protection to the family members of the victim and witnesses of the case,” the bench directed and said that it cannot lose sight of the fact that the accused is the son of a powerful leader of the ruling party and that there is material available in the case diary indicating that the family members of the victim have been threatened.

“The case diary further reflects that the rape may have been committed upon the victim not only by the person named in the FIR but by other persons also,” the bench said after perusing the records of the case produced before it by the police. Petitioner’s lawyers Phiroze Edulji and Anindya Sundar Das had prayed for a CBI probe in the alleged rape and death of the minor girl as the accused is the son of an influential panchayat leader of Hanskhali belonging to the ruling Trinamool Congress.

It was alleged that the 14-year old who belonged to the scheduled caste category had on April 4 gone to a birthday party of the accused at his residence in Hanskhali and was drugged before being raped. She died a day after allegedly due to bleeding following the atrocity on her. The FIR was registered on April 10 at Hanskhali police station by the family members of the girl, who had remained silent about the incident allegedly due to threats and pressure from the accused and his kin. The girl was allegedly cremated in the village crematorium without any post mortem or a death certificate. Alleging that the police came to know about the incident nearly a week after its occurrence, Das claimed that this itself showed the police failed to act properly.