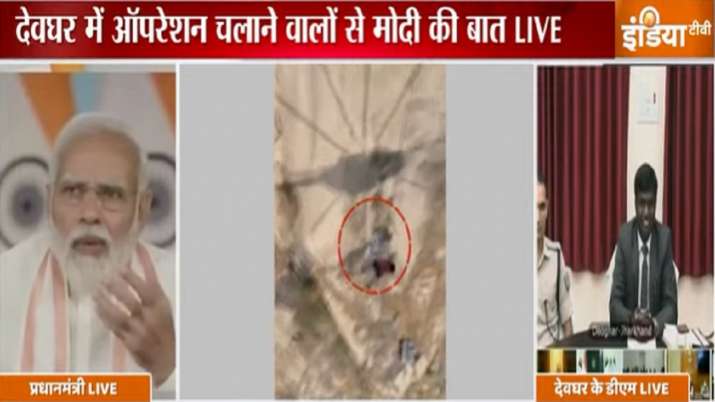 Drones were used to provide water, food to stranded people in cable cars in Jharkhand ropeway accident, said Deoghar District Magistrate Manjunath Bhajantri during interaction with PM Modi on Wednesday. The District Magistrate thanked all the agencies involved in the rescue operation.

Prime Minister Narendra Modi interacted with personnel of Army, IAF, ITBP who were involved in daring rescue operation in order to laud their effort.

During the interaction, the Prime Minister mentioned that though such incidents happen rarely but still this episode should be taken as a case study for the future missions.

The Prime Minister lauded the efforts of all personnel from multi-agencies who put their own life at risk and rescued people trapped in cable cars.

One of the personnel while speaking about the mission said that they faced challenges like swinging of the cable cars because of the pressure of the helicopters whenever they were taking them near the ropeway.

Lauding their efforts, PM Modi said, “Over the course of 3 days, you worked round the clock, completed a difficult operation & saved lives of several citizens. The entire country has appreciated your efforts. Though we’re sad that the lives of some people couldn’t be saved.”

Meanwhile, Jharkhand government which is conducting an official probe into the tragedy has announced that a compensation of Rs 5 lakh will be given to the dependents of each dead in the ropeway accident.

Deoghar civil surgeon Dr CK Sahi said, “Out of 45 people admitted to the Sadar hospital, 40 have been discharged. Five persons are undergoing treatment at the hospital. Conditions of two including a pregnant woman and one and a half-year-old child are a bit serious.”

“The one and a half-year-old child is being referred to Ranchi for jaw surgery,” he said.

In all some 59 people were successfully rescued by Indian Air Force helicopters from the site of the mishap in operations spread over 46 hours starting on Sunday which lasted till Tuesday afternoon.