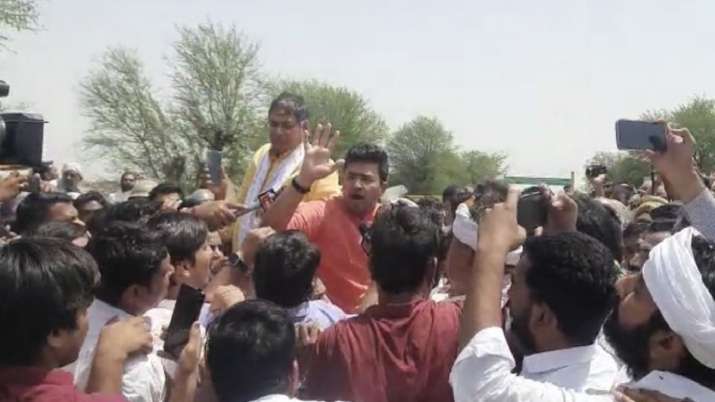 On his way to Rajasthan’s violence-hit Karauli, BJP Yuva Morcha national president and MP Tejasvi Surya was detained by the state police on Wednesday. Some other BJP leaders were also stopped to enter the city. Surya was accompanied by BJP leader Satish Poonia and several supporters when the state police stopped them at the Dausa border.

Surya vehemently opposed being stopped to enter Karauli, and even called the Rajasthan Congress ‘a dictatorial government’. “Section 144 is not in place at where we are now…It’s our constitutional right to go to Karauli. This dictatorial govt is snatching our rights, which is why we are protesting,” he told the media.

Earlier today, Surya met the victims of the Karauli incident at Sawai Man Singh Hospital in Jaipur. “We’re witnessing ‘jungle raj’ under Ashok Gehlot govt. The condition of Karauli violence victims is critical. BJP will protest against this,” he said after he met the victims.

More than 35 people were injured in the violence that broke out after stones were pelted at the bike rally on Hindu New Year on April 2.

The violence started when some participants of a bike rally — carried out on the occasion of Hindu New Year — raised provoking slogans passing through a Muslim-dominated area, which was responded with heavy stone pelting from nearby houses.

A curfew was later imposed in Karauli, which was lifted after some days. Former CM of Rajasthan, Vasundhara Raje Scindia also visited the violence-hit region and met the injured.

She hit out at Chief Minister Ashok Gehlot for pointing a finger at the BJP, saying the Congress government’s appeasement policies are responsible for the situation.