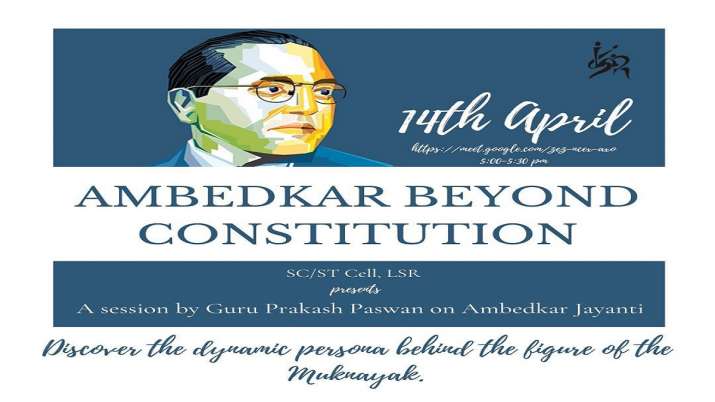 Reacting to LSR’s decision to cancel the event, Paswan said it was a sign of “institutionalisation of cancel culture” in the country.

“Can the subaltern speak? Not at one of the premier institution of country, Lady Sriram College, University of Delhi,” Paswan said.

“On what account was my voice stifled? My ideas or my identity, regardless of that this is a great to the legacy of Babasaheb Ambedkar. An institution can’be an Eco chamber. As a teaching faculty this saddens me even more when students close their horizon!” he went on to add.

‘Reaction based on recent developments in JNU, Karnakata’

A text message sent to Paswan by Astha Kumari, who was coordinating the event for LSR, stated that the talk was cancelled keeping in view the recent incidents in Karnataka and Jawaharlal Nehru University (JNU).

“We regret to inform you that the talk that we had scheduled on Ambedkar Jayanti, on 14th April needs to be called off. There has been no such order from the administration, however, there has been huge outcry from the student body stating their disagreement with this talk,” she said.

“This is a reaction based on a mix of recent developments in Karnataka and JNU. Since, we would like to refrain the atmosphere of the SC/ST Cell, especially LSR from becoming a political space instead of academic one, it was in the best interest of the institution to cancel the event,” Kumari added.

“The intolerant ideological and political assertion of Communist sponsored student bodies, that permeates our academic institutions, is a bane. It obstructs free expression and assimilation of competing ideas. LSR now succumbs, cancels @IGuruPrakash’s lecture under pressure,” Malviya said in his tweet.