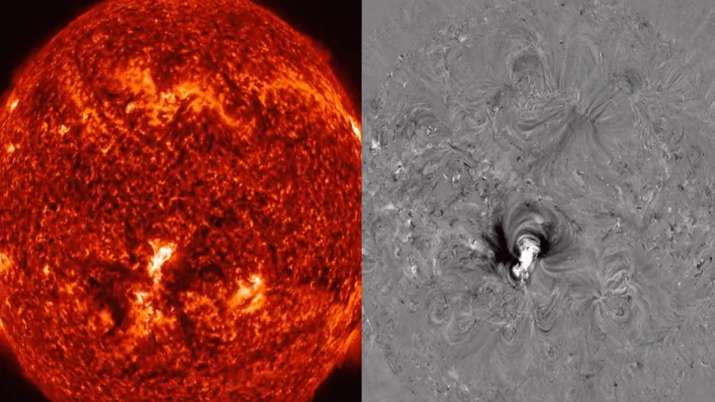 The earth is about to be hit by a severe geomagnetic solar storm, space agencies across the globe have predicted. The storm could hit the planet as soon as tomorrow. The impact of the geomagentic storm if it really hits could be dangerous and cause technology related outages across the globe.

“#Solarstorm prediction models from both NOAA & NASA show the storm hits April 14, just ahead of a fast solar wind stream! This should intensify the storm as the stream will give it a push from behind! #Aurora field reporters, be sure to charge your camera batteries!” she said.

“The NASA #solarstorm prediction model shows the hit occurring a little later on April 14 at 12pm UTC time compared to the NOAA model, which shows the arrival a bit earlier at 7am UTC time! Either way, both indicate an excellent chance for #aurora!” the Physicist added.

Last week, filaments of plasma erupted from a fiery canyon on the Sun’s surface, releasing powerful streams of magnetised solar wind to which observers reported that it might result in geomagnetic storms and auroras on Earth.

According to Space Weather, the “canyon of fire” is at least 20,000 kilometres deep and 10 times as long.

In a statement, the UK weather forecaster Met Office confirmed two “filament eruptions” – on April 3 and the second on April 4 – occurred in the south-central part of the Sun.

Satellites in the extreme ultraviolet part of the electromagnetic spectrum and ground telescopes equipped to observe in the warmth-carrying infrared wavelengths were both able to see the eruptions.

Both eruptions were accompanied by coronal mass ejections (CMEs), or expulsions of charged plasma from the Sun’s upper atmosphere or the corona, the Met office said in a statement.

When a CME hits Earth, it can wreak havoc with the planet’s magnetic field, causing a geomagnetic storm. Powerful geomagnetic storms can disrupt satellite links and damage electronics in orbit, Space.com reported.

In some cases, these storms can even disturb power networks on the ground. On the other hand, geomagnetic storms also treat skywatchers on Earth to mesmerising aurora displays.

The year 2022 is expected to be relatively quiet for the Sun overall, as we are still towards the beginning of the 11-year solar cycle of activity that began in December 2019. Cycle beginnings usually have fewer sunspots and fewer eruptions. Activity should increase as we approach the peak, forecasted to be in mid-2025, the report said.

ALSO READ | Some 3,800 years ago, earth was hit by a super earthquake, triggered tsunami up to 66 feet high, says study