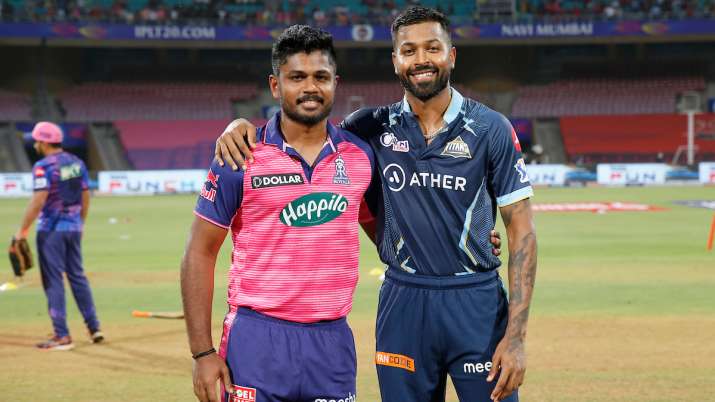 OUT!  Agony for Matthew Wade. He is run out. Good fielding effort from van der Dussen. He was looking good but has to walk back now.

Gujarat Titans 12/0 after first over – Expensive over from Neesham. Matthew wade hits three boundaries. Not the start Rajasthan was looking for.

Jimmy Neesham to open the attack for Rajasthan. Matthew Wade on strike. Gill at the non-strikers end.

24-years-old Yash Dayal is making his debut for the Titans today. He is a left-arm medium fast bowler. Here are his domestic T20 numbers:

Rajasthan Royals won the toss and have decided to bowl.

We’d like to bowl first here. We did a very good job to win the game with dew condition and losing the toss but I’d like to use the conditions. Yesterday, Trent Boult had a small niggle and isn’t available for today’s game. Jimmy Neesham is replacing him.

We would have liked to bowl first as well but I wouldn’t mind batting first as well. It’s always good to get responsibility, I have always been a player who has enjoyed taking responsibilities, taking things on my shoulder. It helps me to get better as a cricketer and as a person as well. The boys are pretty chilled out, the supporting staff is nice. Right now, we are going in the honeymoon phase and I’d like to contribute. I know I always have two departments to contribute. Even if I am having a bad day with my bat, I can still contribute with the ball and vice versa. We were 5-10 short, but we could have been a little more disciplined with our bowling. I will not be too strict on the bowlers, they are trying their best and we are there to enjoy the sport. Two changes, Yash Dayal comes in for Darshan Nalkande and Vijay Shankar comes in for Sai Sudharshan

Changes: Yash Dayal is making his debut for the Titans. He replaces Darshan Nalkande. Vijay Shankar comes back in for Sai Sudharshan.

Changes: Trent Boult sits this one out owing to a niggle, Jimmy Neesham replaces him

“This isn’t a new wicket, it’s been used once before. It is smack bang in the middle of this beautiful stadium. One side’s 73m, the other is 70m – the dimensions are very similar. It’s not a huge ground as well. The pitch is an absolute beauty. It’s got a fairly strong bit of grass in and around the hard lengths that the bowlers love to bowl on. It’s very hard, it’s got a little sheen to it and don’t expect to be any different other than a lot of runs that are piled on tonight. 120 sixes have been scored at this ground in just eight games, that’s extraordinary. 46% of the sixes have been downtown. This wicket is very good, it’s got true, even pace. The quicks and the spinners got to be around those stumps, otherwise they are going to go the journey. Expect a lot of runs tonight, I think this is going to be a cracking game.”