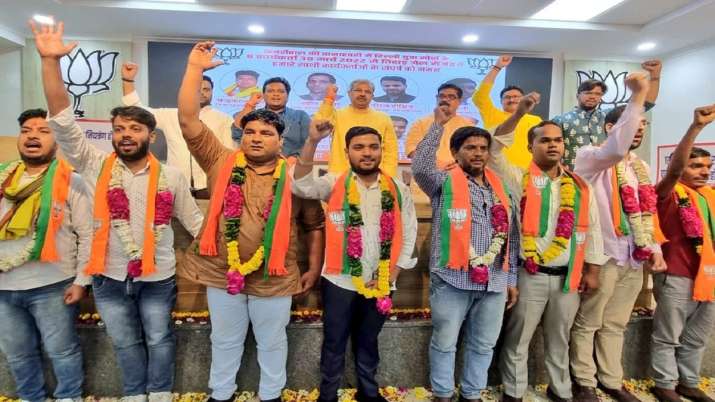 The Delhi BJP on Thursday garlanded eight workers who were jailed for protesting against AAP national convenor and Delhi CM Arvind Kejriwal and indulging in vandalism outside his house in the national capital. These Yuva Morcha workers were let out on bail. They were arrested on March 31.

“Eight workers of BJP Yuva Morcha, who were jailed while protesting against anti-Hindu Kejriwal, got bail by the court after 14 days. Welcoming these young revolutionaries to the state office today. Each of our workers will always fight against the anti-Hindu forces,” Delhi BJP chief Adesh Gupta tweeted Thursday along with the photos.

The AAP reacted to this immediately saying the move sends out a message about BJP to its workers all over the country that they too will be felicitated if they indulge in “hooliganism and vandalism”.

“The high court did not grant bail to the accused of days. When they got the bail, the BJP office honored these goondas,” said AAP leader Atishi at a press conference.

The protestors, led by BJP Yuva Morcha’s national president and MP Tejasvi Surya, had held a demonstration against Kejriwal’s remarks on the recently released controversial movie “The Kashmir Files”, which is based on the exodus of Kashmiri Pandits from the Valley after the outbreak of militancy.

Some of the protesters, around 1 PM, breached two barricades and reached outside Kejriwal’s house where they created a ruckus and shouted slogans.