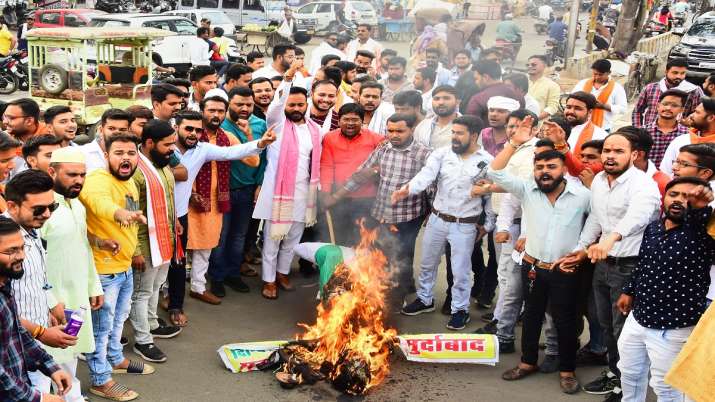 Khargone violence: Madhya Pradesh Chief Minister Shivraj Singh Chouhan and Congress Rajya Sabha MP Digvijaya Singh continued to train guns at each other on Thursday over the recent communal violence in Khargone that occurred on the occasion of Ram Navami on April 10. Addressing an event in Bhopal to mark Ambedkar Jayanti on Thursday, Chouhan said the houses of poor people and Scheduled Caste were burnt in Khargone and when the state government took action against the rioters, it did not go down well with some Congress leaders.

Chouhan’s remarks followed Singh’s statement, in which he directly held the Chief Minister and the district administration responsible for the Khargone violence. “Some people are hatching a conspiracy to create communal divide and disrupt peace and harmony in Madhya Pradesh. Many houses were burnt and when the state government ordered action against those involved in the violence, Digvijaya Singh has a problem with the government’s act,” Chouhan said. Chouhan also accused former MP Chief Minister Singh of sharing fake photographs showing men waving saffron flags outside a mosque on social media, and said that Singh wants ‘to set Madhya Pradesh on fire’. “No one from any religion or community has to worry. The government will take care of your safety and honour. But yes, action will be taken against those who create disturbance. And Digvijaya Singh will not be able to save such people,” Chouhan added.

On the other hand, Singh said that no matter how many FIRs are lodged against him, he will always stick to the truth. He also accused Chouhan of being biased over the Khargone violence. “During my tenure as the Chief Minister, not even a single case of communal violence was reported in the state because whoever tried to disrupt peace and harmony, we took action against such people without being biased,” Singh said.

On Wednesday, Singh had said, “The BJP has always used religion as a weapon for political gains. And when I am demanding investigation into the Khargone communal violence, BJP leaders are filing a case against me.” He added that the violence in Khargone was a failure of the district administration and the police.