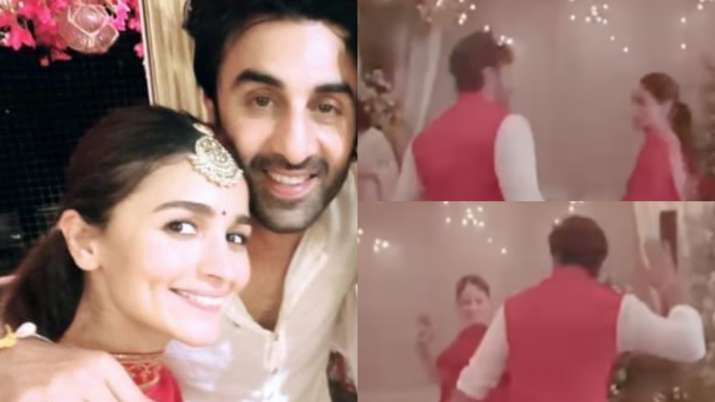 Alia Bhatt and Ranbir Kapoor‘s no-fuss wedding was nothing less than a dream. The couple who dated for five years tied the knot in an intimate ceremony at Ranbir’s Bandra residence, Vastu in the presence of their close friends and family. Several pictures and videos from their wedding celebrations are going viral on social media platforms. Recently, an adorable video from their sangeet has surfaced online. In the video, the star couple can be seen dancing together to the tunes of Malaika Arora and Shah Rukh Khan‘s 1998 song Chaiyya Chaiyya from the film Bombay.

Picturised on Shah Rukh Khan and Malaika, Ranbir and Alia match their steps as they tap their feet on the track. Alia chose to wear a red Anarkali kurta set while Ranbir co-ordinated with his ladylove in a red nehru jacket over the white kurta-pyjama.

Alia Bhatt also danced her heart out with filmmaker Karan Johar on her own song Radha from her debut film Student Of The Year.

For their wedding day, the couple was dressed in white and gold shimmery attire from ace fashion designer Sabyasachi’s collection. The duo made their first media appearance as husband and wife post their nuptials on Thursday evening.

Later, Alia took to her Instagram and shared her official wedding pictures with Ranbir with the caption, “Today, surrounded by our family and friends, at home … in our favourite spot – the balcony we’ve spent the last 5 years of our relationship – we got married. With so much already behind us, we can’t wait to build more memories together … memories that are full of love, laughter, comfortable silences, movie nights, silly fights, wine delights and Chinese bites. Thank you for all the love and light during this very momentous time in our lives. It has made this moment all the more special. Love, Ranbir and Alia.”

The pre-wedding festivities including a special pooja and mehendi ceremony were conducted on Wednesday. Ranbir and Alia had fallen in love with each other on the sets of their upcoming film ‘Brahmastra’. The two made their first appearance as a couple at Sonam Kapoor‘s wedding reception in 2018.