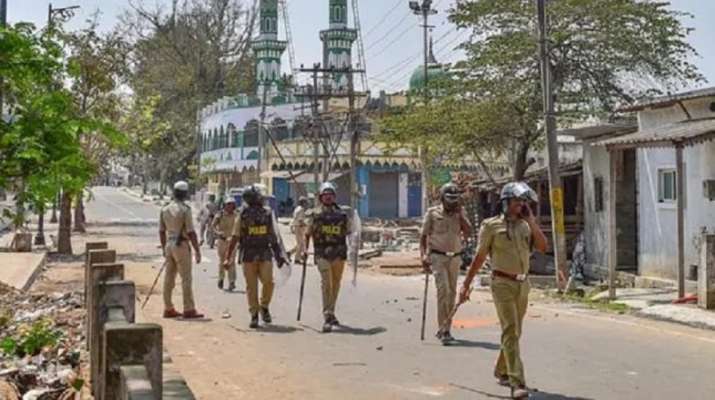 Uneasy calm still prevails in violence-hit Khargone town of Madhya Pradesh, where nearly 100 people were arrested since violence during Ram Navami celebrations. Though police say the law and order situation is under control in the district, locals say they are facing many problems, mainly related to cancellation of weddings. Locals say families are refusing to marry their daughters in the riots-affected areas.

Sanjay Nagar Basti in Khargone, where the mob burnt houses to ashes, has many stories of grief.

Mahesh Patil, a local said his son’s wedding got called off because of the riots. His son was supposed to be married after two months but after the riots, the bride’s side has refuse to send their daughter to the riot-hit areas.

Mahesh Patil’s son’s marriage was fixed six months back but his wedding was called off by his in-laws arguing that such incidents often happen in the district.

“My son’s wedding got called off as rioters looted my house during Ram Navami. The in-laws saw that it is not feasible to live here as riots and stone-pelting happen here. They say that the wedding will happen only if we buy a plot somewhere else,” Patil said.

Some families were forced to postpone the marriage of daughters due to the violence that took place during a Ram Navami procession.

Laxmi, who was to get married on April 14 said, “On Ram Navami violence broke out in our village. We tried to stop the rioters but they didn’t stop and looted our house. My house was full of gifts and all other wedding essentials. All the relatives were here for my wedding but it is now postponed due to the violence.”

“Stone pelting occurred in Talab Chowk during Ram Navami… my sister’s wedding material, kept in a neighbour’s house got looted during the violence. I am in talks with the groom’s side we will extend the wedding date due to these riots,” said a local, Satish.

“The administration should take strict action against the rioters and if they will not take action then will be forced to migrate. This is not the first time but the same thing happened in 2016 and 2021. People are afraid to visit our village; they don’t want to have any kind of relationship with the villagers. People think that the girls are also not safe in here and that is why they refuse for weddings too,” he added.

“Shouldn’t bulldozers be used against those who trouble the poor? The houses of the poor were burnt in Khargone. They should not worry as ‘Mama’ will build their houses. We will recover from those who burnt their houses,” said Chouhan.

Several people including police personnel were injured when groups of people pelted stones at each other during a Ram Navami procession on April 10.

The stone-pelting started at the beginning of the procession leaving around four people injured including a police inspector.