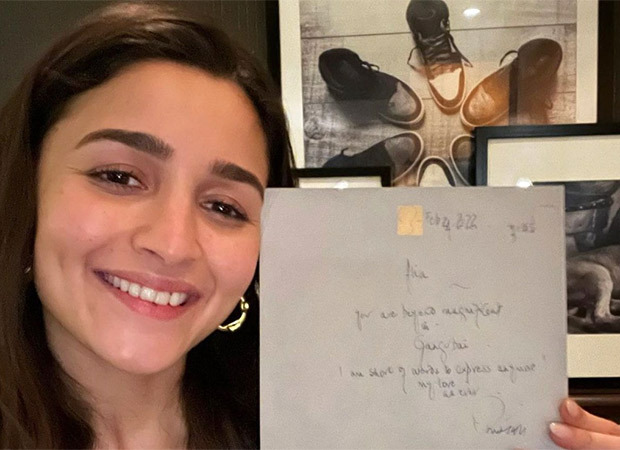 After sharing a series of her pictures from her wedding with Ranbir Kapoor, Alia Bhatt recently posted another series of photos, albeit of her life before the marriage. In a series of pictures that she likes to call her ‘selfie life’, one photo that caught our attention was a special appreciation letter for her film Gangubai Kathiawadi from none other than her Brahmastra co-star and legendary actor Amitabh Bachchan.

Alia Bhatt shared a series of her selfies that were taken from January to April, before she tied the knot with her longtime boyfriend Ranbir Kapoor, who also plays the leading man of Brahmastra. She captioned the photos saying, “Jan – April ISL ( In Selfie Life ) ✌️” While the first photo showcased her sunkissed avatar, in the second one, we can see the actress proudly flaunting a rather sweet note that was sent to her by Amitabh Bachchan.

Amitabh Bachchan sent her a handwritten note lauding the actress for her portrayal of the Kamatipura queen Gangubai Kathiawadi. He had written, “Alia, you are beyond magnificent in Gangubai. I am short of words to express anymore! My love as ever, Amitabh Bachchan,”

Besides the two other photos, the third photo featured Alia Bhatt from the sets of the song ‘Kesariya’ from the film Brahmastra, which was shot in Varanasi in March alongside her husband Ranbir Kapoor. And the fourth picture, showed the actress relaxing in a swimming pool.

Alia Bhatt and Ranbir Kapoor tied the knot on April 14 at the latter’s residence Vastu in Bandra, suburban Mumbai after dating each other for about four years. The couple will be seen together on the big screen for the first time in the multi-lingual Brahmastra. Directed by Ayan Mukerji, the film also stars Nagarjuna, Mouni Roy in pivotal roles and it will release on September 9.