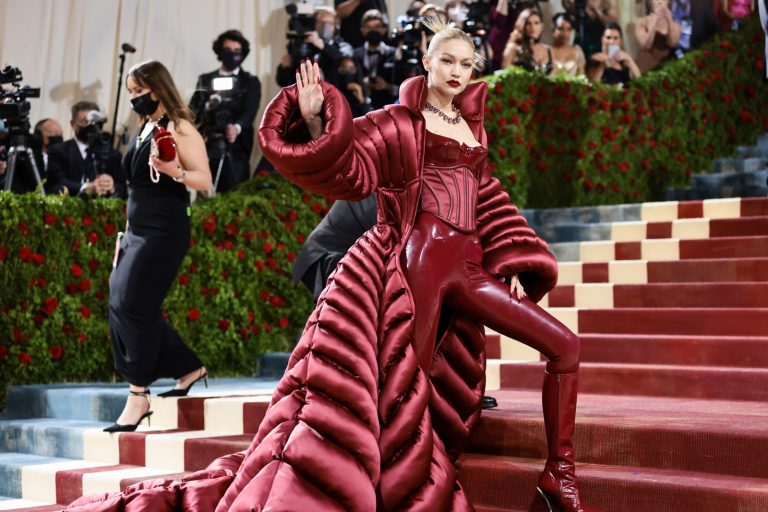 We all have nightmares and we wish that they don’t come true. However, a similar kind of thing happened to supermodel Gigi Hadid at this year’s Met Gala.

Take a look at Gigi’s dress.

Gigi Hadid wore a bold red, leather catsuit to the Met Gala, but it is being compared to a sofa! That’s right! People have trolled Gigi Hadid for wrapping a sofa. She matched the red carpet in a red Atelier Versace puffer coat which she wore over a matching catsuit. This year’s theme for the Met Gala was “In America: An Anthology of Fashion”.

Gigi’s outfit was a modern interpretation of the coats used in the 1800s. Although this has turned into a meme fest on the internet.

How did the internet react to Gigi’s dress?

One of the users on Twitter wrote, “She literally used a sofa”

On the other hand, Versace was all praises for Gigi Hadid on their official Instagram account. Gigi Hadid has walked for almost all of the top luxury brands including Michael Kors, Fendi, Chanel and many more. However, this is something of a nightmare for supermodels to be trolled for the wrong outfit.

Other celebrities at the Met Gala

The whole event was lovely with all the dazzling dresses and flashes and laughter. But mainly, the red carpet was done absolute justice by the couple Blake Lively and Ryan Reynolds. These two have always been the best and most fun couple on social media. Co-host Blake Lively showed up in a beaded Versace gown with an oversized satin bow that unfurled to reveal a light blue train. Ryan Reynolds wrote on his Instagram account, “Blake changing outfits in a split second on the red carpet was a moment I’ll never forget”

Variety captured A beautiful moment between the couple when Blake lively changed her dress. We see Ryan all smiling and clapping at his wife. You can watch the short video here.

We also saw Billie Eilish on the red carpet in a very beautiful silk GUCCI gown by Alessandro Michele. Entirely upcycled materials gave the finishing of the gown.“I just wanted to be as eco-friendly as possible,” Eilish said during the Vogue Livestream.